The three active volcanic mountains Ruapehu, Ngauruhoe and Tongariro are at the heart of Tongariro National Park. 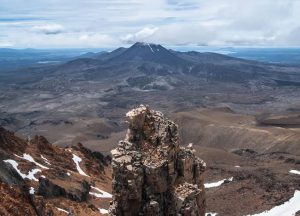 The mountains of the Tongariro National Park have deep spiritual significance for the Maori people. Legend has it that the high priest Ngatoroirangi was frozen in a snowstorm while exploring Tongariro and he called to Hawaiki, the traditional Polynesian homeland of the Maori, for fire. His prayer was answered, via the channel we now call the Pacific Rim of Fire, and the mountain erupted.

Mount Ruapehu is one of the world’s most active volcanoes. Minor eruptions are frequent and Ruapehu has erupted at least 60 times since 1945. There was a major eruption in September 1995 and the last recorded eruption, which was just a little one, happened in October 2006. Luckily, volcanoes don’t erupt without warning so visiting the mountain is quite safe. Above all, the sites are constantly monitored.

Mount Ngauruhoe is the youngest vent and highest peak in the Tongariro volcanic complex on the Central Plateau. Ngauruhoe first erupted about 2,500 years ago.

Although seen by most as a volcano in its own right, it is technically a secondary cone of Mount Tongariro.

Mount Ngauruhoe was used as a stand-in in Peter Jackson’s The Lord of the Rings movie trilogy, achieving worldwide exposure. 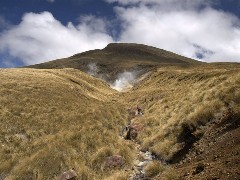 Mount Tongariro is the most northern of the group of three active volcanoes of the Tongariro National Park. Mt Tongariro (elevation 1968 m) is a complex volcano of several craters that have blown their way out of what was once probably a much larger mountain. In the 1950s Tongariro pumped fountains of lava 300 m into the sky and in 1967 it sent glowing clouds of gas and ash down its slopes. Since then, it’s been relatively quiet, just puffing out the occasional cloud of gas or ash.